The electric vehicle boom is pay-dirt for factory machinery makers

The investment surge by both new and established automakers in the electric vehicle market is a bonanza for factory equipment manufacturers that supply the highly automated picks and shovels for the prospectors in the EV gold rush. 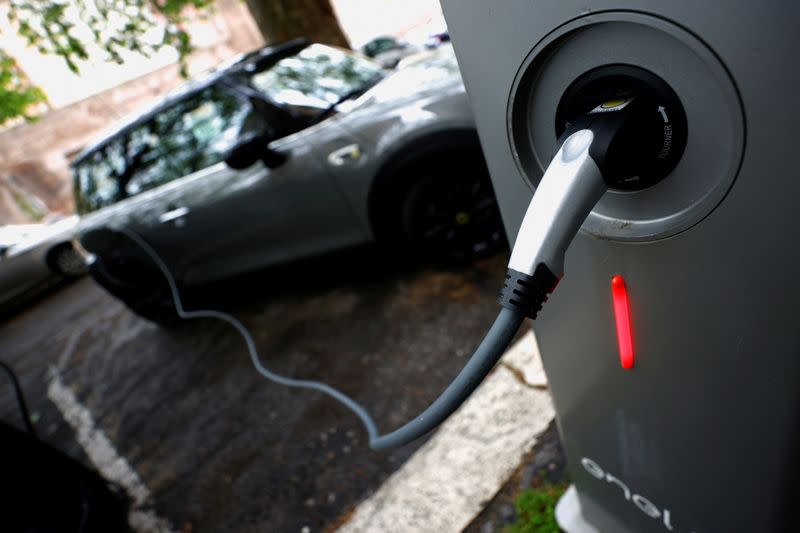 The good times for the makers of robots and other factory equipment reflect the broader recovery in U.S. manufacturing. After falling post-COVID to $361.8 million in April 2020, new orders surged to almost $506 million in June, according to the U.S. Census Bureau. 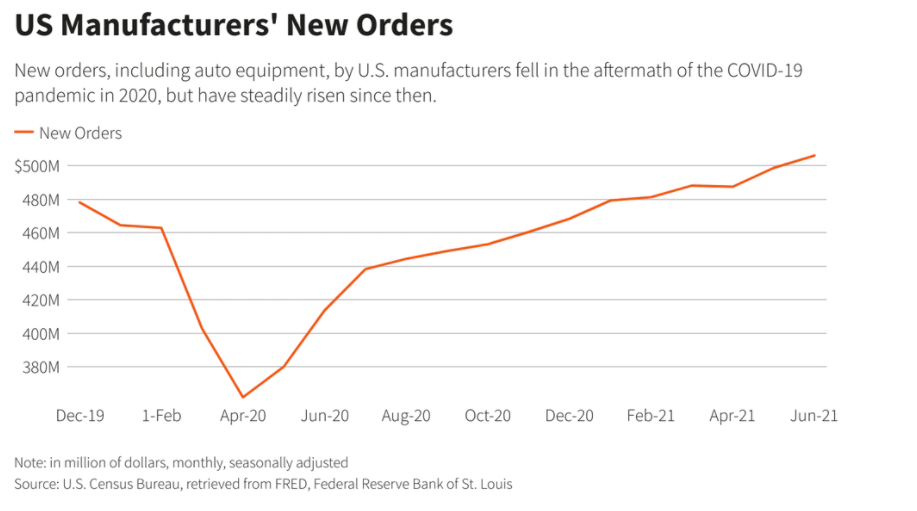 New electric vehicle factories, funded by investors who have snapped up newly public shares in companies such as EV start-up Lucid Group Inc (LCID.O) are boosting demand. “I’m not sure it’s reached its climax yet. There’s still more to go,” Andrew Lloyd, electromobility segment leader at Stellantis-owned (STLA.MI) supplier Comau, said in an interview. “Over the next 18 to 24 months, there’s going to be a significant demand coming our way.”

Growth in the EV sector, propelled by the success of Tesla Inc (TSLA.O), comes on top of the normal work manufacturing equipment makers do to support production of gasoline-powered vehicles.

Automakers will invest over $37 billion in North American plants from 2019 to 2025, with 15 of 17 new plants in the United States, according to LMC Automotive. Over 77% of that spending will be directed at SUV or EV projects.

Equipment providers are in no rush to add to their nearly full capacity.

“There’s a natural point where we will say ‘No'” to new business, said Comau’s Lloyd. For just one area of a factory, like a paint shop or a body shop, an automaker can easily spend $200 million to $300 million, industry officials said.

‘WILD, WILD WEST’ “This industry is the Wild, Wild West right now,” John Kacsur, vice president of the automotive and tire segment for Rockwell Automation (ROK.N), told Reuters. “There is a mad race to get these new EV variants to market.” Automakers have signed agreements for suppliers to build equipment for 37 EVs between this year and 2023 in North America, according to industry consultant Laurie Harbour. That excludes all the work being done for gasoline-powered vehicles.

“There’s still a pipeline with projects from new EV manufacturers,” said Mathias Christen, a spokesman for Durr AG (DUEG.DE), which specializes in paint shop equipment and saw its EV business surge about 65% last year. “This is why we don’t see the peak yet.”

Orders received by Kuka AG, a manufacturing automation company owned by China’s Midea Group (000333.SZ), rose 52% in the first half of 2021 to just under 1.9 billion euros ($2.23 billion) – the second-highest level for a 6-month period in the company’s history, due to strong demand in North America and Asia.

“We ran out of capacity for any additional work about a year and a half ago,” said Mike LaRose, CEO of Kuka’s (KU2G.DE) auto group in the Americas. “Everyone’s so busy, there’s no floor space.”

Kuka is building electric vans for General Motors Co (GM.N) at its plant in Michigan to help meet early demand before the No. 1 U.S. automaker replaces equipment in its Ingersoll, Ontario, plant next year to handle the regular work. Automakers and battery firms need to order many of the robots and other equipment they need 18 months in advance, although Neil Dueweke, vice president of automotive at Fanuc Corp’s (6954.T) American operations, said customers want their equipment sooner. He calls that the “Amazon effect” in the industry.

“We built a facility and have like 5,000 robots on shelves stacked 200 feet high, almost as far as the eye can see,” said Dueweke, who noted Fanuc America set sales and market share records last year.

COVID has also caused issues and delays for some automakers trying to tool up.

R.J. Scaringe, CEO of EV startup Rivian, said in a letter to customers last month that “everything from facility construction, to equipment installation, to vehicle component supply (especially semiconductors) has been impacted by the pandemic.”

However, established, long-time customers like GM and parts supplier and contract manufacturer Magna International (MG.TO) said they have not experienced delays in receiving equipment.

Another limiting factor for capacity has been the continuing shortage of labor, industry officials said. To avoid the stress, startups like Fisker Inc have turned to contract manufacturers like Magna and Foxconn, whose buying power enables them to avoid shortages more easily, CEO Henrik Fisker said.

Growing demand, however, does not mean these equipment makers are rushing to expand capacity. Having lived through downturns in which they were forced to make cuts, equipment suppliers want to make do with what they have, or in Comau’s case, just add short-term capacity, according to Lloyd. “Everybody’s afraid they’re going to get hammered,” said Mike Tracy, a principal at consulting firm the Agile Group. “They just don’t have the reserve capacity they used to have.”