That would be six times faster than 350-kW charging stations, and Designwerk is moving fast towards real-life applications. 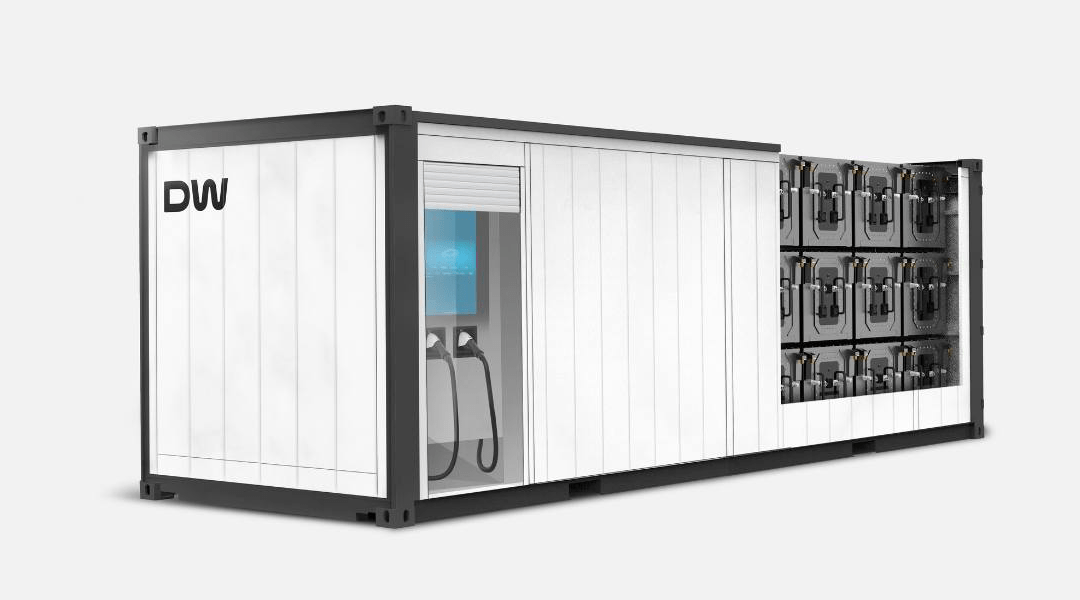 The Swiss eMobility specialist Designwerk has presented a new type of megawatt charging station designed to rapid-charge electric trucks within 45 minutes. That would be six times faster than 350-kW charging stations, and Designwerk is moving fast towards real-life applications.

The new “mega charging station”, as Designwerk refers to it in the announcement, relies on the latest Megawatt Charging System (MCS) standard. Buffers batteries, integrated into a large container, shall avoid peak loads and guarantee continuous megawatt charging – we get to the details in a second.

Designwerk does not disclose such data in the press release, but we found them on the project website:  the 25-ton container contains batteries worth 1,800 kWh, coming from new productions or second-life projects.

The unit connects to the power grid via CEE 124. The MCS output can deliver up to 2,100 kW of charging power (up to 3,000 amps at 500 to 800 volts). A CCS plug is also installed. The overall efficiency from the mains to the buffer battery and then to the vehicle is around 90 per cent.

Designwerk relies on the Megawatt Charging System (MCS) for its solution. The CCS initiative CharIN launched MCS at the Electric Vehicle Symposium (EVS35) in Oslo this summer. It is designed for a charging voltage of up to 1,250 volts and a current of 3,000 amperes, which theoretically corresponds to a charging capacity of up to 3.75 megawatts.

“The recognition that powerful charging stations require networks is an integral aspect of the project’s initial situation,” states Designwerk. The company adds the demonstration facility was intended “to highlight ways in which a high-capacity charging network and security of supply can go hand in hand”.

Vivien Dettwiler, a member of the management of Designwerk, explains, “We install Second Life e-truck batteries in our charging containers as a buffer to cope with peak demand. This not only eliminates the need to expand the grid, but it also means that the battery system should be able to feed renewable electricity back into the grid.”

So far, installations are planned at Galliker Transport AG, Käppeli Logistik and Murg Flums Energie to prove the concept.

Volvo Group acquired a majority stake in Designwerk in April 2021. Volvo Group, with its trucks, buses, construction machinery and marine division, is not the carmaker Volvo Cars, which belongs to Geely – although Geely also holds a minority stake in Volvo Group. Designwerk and Volvo Group have worked together for several years, with many Futuricum vehicles based on Volvo chassis. In November, Designwerk also launched an all-electric tractor unit with a battery capacity of 1,000 kilowatt-hours.